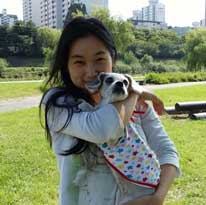 She has been working on raising public awareness of the problems surrounding animal testing and animals used for human entertainment.

Her role also involves working with policy makers in an effort to bring a ban on cosmetics animal testing in Korea and establishing regulations to provide welfare for animals in captivity.

She holds a BSc in Animal Behaviour from the University of Sheffield and has appeared on various media to speak out for animals used in science or show industry.