You are in: Home » About The Prizes » Training Prize

For individuals, teams or organisations involved in training others in non-animal methods.

Many established scientists may not have been trained in alternative methods or might not even be aware of them, while future scientists and students need to be provided with education in alternatives in order to be able to pursue further research in this area.

Establishing training programmes and increasing capacity, whether as one-off workshops or ongoing programmes, can make a huge difference to this field.

This prize recognises the importance of dissemination of methods among commercial scientists, researchers and students. The criteria for training is broad, and includes training existing scientists in new techniques, open-source databases, and the education of school children.

There is a £50,000 prize fund shared between all the winners of the Training Prize.

Entries for the Lush Prize 2022 are now closed.

Laboratory of Education and Research in Pharmacology and Cellular Toxicology, LPCT Team, Brazil (£50,000)
Disseminating Alternative Methods in Brazil and South America: Education and Training for Animal Replacement in Science.
https://farmatec.farmacia.ufg.br/

Kirkstall, UK (£25,000)
Kirkstall’s training programme has reached over 600 scientists. The recognition and financial reward gained from the Lush Prize presents us with a great opportunity to increase the impact of our training activity and our continued efforts towards the replacement of animal testing.
http://kirkstall.com/

Iranian Anti-Vivisection Association, Iran (£25,000)
IAVA has been working with universities for over six years, meeting with deans, teachers and students nationwide to demonstrate and introduce humane alternatives.
http://www.noanimaltesting.ir

Dmitry Leporsky talks about what winning a Lush Prize meant for him.

Africa Network for Animal Welfare, Kenya (ANAW)
ANAW was established in 2006 as a Pan African Non-Governmental Organisation, and its mission is to work together with communities, Governments and other animal welfare stakeholders in promoting humane treatment of all Animals across Africa.
www.anaw.org

Institute for In Vitro Sciences, USA (£25,000)
For their vital work on training researchers in non-animal methods from Brazil to Japan
http://www.iivs.org

InterNICHE, (£25,000)
For their work in training in former Soviet states, South America and Africa.
http://www.interniche.org

The Institute for In Vitro Science was a Lush Prize winner for Training in 2012. Co-Founder Erin Hill discusses the impact of winning the Lush Prize and encourages others to submit a nomination. 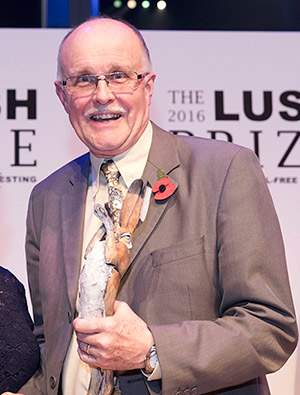