You are in: Home » About The Prizes » Public Awareness Prize

Despite years of campaigning, animal testing has yet to be consigned to the history books where it belongs. However, partial legislative victories have led to the common misconception that animal testing, especially for cosmetics, no longer takes place.

It is vital therefore that the public is reminded that this cruel and unscientific practice does continue in many areas of the world. Support is essential for public awareness activities to ensure that this issue remains high on political and consumer agendas.

This category now has two sections, for future projects as well as existing ones. A £50,000 prize fund will be divided between a current project and a future project.

AFABILITY, France / UK (£30,000)
AFABILITY is striving to replace animal derived antibody (ADA) production methods with Animal Friendly Affinity-reagents (AFAs) that do not require the use of animals, thereby significantly reducing the numbers and suffering of animals in the biomedical sciences.
http://www.afability.com

Te Protejo, Chile (£20,000)
We believe that we won the Public Awareness Prize because we have positioned the cruelty-free shopping lifestyle in Chile while educating consumers, teaching how to empower themselves and demand more ethical products.
http://www.teprotejo.cl

Vshine Animal Protection Association, China (£50,000)
Vshine have taken our Be Cruelty Free campaign, to end animal testing for cosmetics (in support of the Humane Society International), across China. In just one year we visited over 160 universities and 30 provincial-level administrative regions, reaching nearly 300,000 college students.
http://www.vshine.org

SOKO Tierschutz EV, Germany (£20,000)
SOKO Tierschutz’s campaign against primate research at the Max-Planck-Institute for Biological Cybernetics in Tübingen, Germany, was based on a ground-breaking undercover investigation. An activist worked for 6.5 months at the facility and was able to document – for the first time in Europe – the reality behind invasive experimental brain research on primates.
www.soko-tierschutz.org

Beagle Freedom Project, USA (£20,000)
For its Identity Campaign to highlight the suffering of dogs and cats in taxpayer-funded laboratories in the USA and encourage the public to use freedom of information legislation to advocate on behalf of those animals.
www.beaglefreedomproject.org

Taiwan Society for the Prevention of Cruelty to Animals (TSPCA)
TSPCA aims to promote kindness towards, prevent cruelty to, and alleviate the suffering of animals in Taiwan by all legal means. It will achieve this through, educating, campaigning and lobbying, investigating cruelty and rehoming.
www.spca.org.tw

Humane Research Australia
HRAs recent campaign included the publication of a children’s (true) storybook called ‘Leo escapes from the lab’. Leo is an ex-laboratory cat who now serves as an ambassador to the millions of animals used in research every year. Its partnership with HSI’s Be Cruelty Free Campaign gained support from the Greens with the introduction of a private members bill to ban the testing of cosmetics on animals and public consultation by Labur.
www.humaneresearch.org.au

Humane Research Australia talk about what winning a Lush Prize meant for them.

PETA, Laboratory Investigations Department, USA (£25,000)
For their high-profile campaigns against organisations that test on animals and that provide support services for animal testing.
http://www.peta.org/

SAFE (Save Animals from Exploitation), New Zealand (£25,000)
For publicising the use of animal-testing in national drugs regulation and helping consumers to buy cruelty-free products.
http://www.safe.org.nz/

New Zealand animal protection organisation SAFE won a Lush Prize for Public Awareness in 2013. In this video, they explain what winning a Lush Prize meant to them.

VITA Animal Rights Centre, Russia (£10,000)
For their work on awareness raising with the Russian media
http://www.vita.org.ru 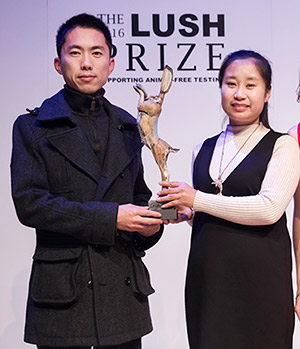