You are in: Home » About The Prizes » Science Prize

The Lush Prize aims to stimulate worldwide research in 21st century toxicology with a view to replacing animal tests completely.

In 2019 Lush Prize decided to re-focus its criteria for awarding its science prizes on projects most likely to lead to practical non-animal tests which could be accepted by regulators.

We think the most promising approaches include:

There is a £50,000 prize fund shared between all the winners of the Science Prize.

Professor Jennifer Lewis, Lewis Bioprinting Team – Harvard University, USA, (£50,000)
Their research seeks to completely eliminate the use of animals by the pharmaceutical and cosmetic industries. Towards this goal, the research team at the Wyss Institute at Harvard University has developed a multimaterial bioprinting platform for fabricating 3D human organ-on-chip models.

Prof Marcel Leist, University of Konstanz / CAAT-Europe, Germany (£40,000)
This group focuses on the development of toxicological tests that are based on the use of human cells. Their vision is that eventually, when all these tests are established, the hazard can be predicted, based on an in vitro test battery.
https://www.uni-konstanz.de/en/university/

Dr. Daniele Zink and Dr. Lit-Hsin Loo, (A*STAR), Singapore (£10,000)
A research team led by Dr Daniele Zink from the Institute of Bioengineering and Nanotechnology and Dr Lit-Hsin Loo from the Bioinformatics Institute of the Agency for Science, Technology and Research in Singapore have developed animal-free methods that can accurately predict the toxic effects of chemicals on the human kidney.
www.ibn.a-star.edu.sg/

Dr Daniele Zink and Dr Lit-Hsin Loo on what winning a Lush Prize meant for them.

Oncotheis, Switzerland (£25,000)
Oncotheis have engineered an innovative human lung cancer tissue culture model to test in vitro both the effectiveness and the toxicity of investigational therapeutics while sparing the lives of animals.
www.oncotheis.com

The Institute for Health and Consumer Protection, European Commission Joint Research Centre, Italy (£50,000)
For its work on toxicity pathways in heptatoxicology and developmental toxicology.
http://ihcp.jrc.ec.europa.eu 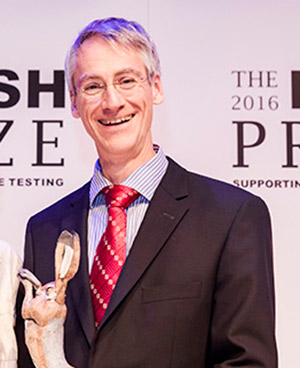