You are in: Home » Blog » New Young Researcher Judge Announced

This year we have introduced a new judge on the Lush Prize judging panel.

Bianca Marigliani has been selected as the judge for 2018. 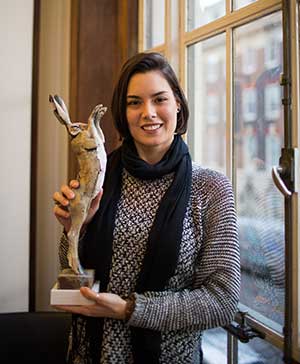 Bianca is a biologist with a Masters Degree in Biotechnology from the University of São Paulo, Brazil.

Also a specialist in Molecular Biology and in Systematic Review and Meta-analysis, she is now finishing her PhD thesis on the replacement of animal-derived products in alternative in-vitro methods, research that was funded by her winning a Young Researcher award in the 2015 Prize.

Her graduation final work was on the consequences of eating animal products for humans, animals and the environment, the beginning of a career now fully devoted to ending the use of animals in science.

She is one of the founding members of the 1R Institute (www.instituto1R.org – which won a Lush Prize for Lobbying in 2016) and is currently working on the development and implementation of alternative in-vitro methods for cosmetic testing, focusing on the total replacement of animals in safety assessments.

The Young Researcher Prize supports young scientists with a desire to fund the next stage of a career focussed on an animal-test free future.

Bianca replaces Dr Kelly BeruBe who served as judge since the start in 2012. The whole Lush Prize Team would like to thank Kelly for of all her input over the years.