You are in: Home » About The Prizes » Lobbying Prize

The Prize aims to reward the work of exceptional individuals, groups or organisations pushing for change, focusing on policy interventions promoting the use of alternatives.

The Lobbying Prize is not a 3Rs prize but a 1R prize. By this we mean it is only seeking projects working on replacements (rather than reduction and refinement) and seeks to avoid funding projects or initiatives linked to animal testing in other ways.

Scientific innovation needs to go hand-in-hand with policy change to ensure that end-users of new testing approaches – industry and regulators – are receptive and responsive to the new methods.

Such change requires a multifaceted, global approach, including science-based lobbying at the national level or supra-national level to:

There is a £50,000 prize fund shared between all the winners of the Lobbying Prize.

From 2020 there is an additional (non-financial) recognition Political Achievement Award in the Lobbying category, for taking up the issue of animal experimentation. This is open to elected political officials in any country and is in recognition of the essential work politicians do to create lasting legal change for animals and science.

Joint winners:
USA, (£50,000)
The HSLF, HSUS and PCRM lobbying efforts to replace the use of animals during reform of the Toxic Substances Control Act paid off in the final bill, which includes a requirement to preferentially use non-animal methods before animal test.
The Humane Society Legislative Fund (HSLF) http://www.hslf.org
The Humane Society of the United States (HSUS) http://www.humanesociety.org
The Physicians Committee for Responsible Medicine (PCRM) http://www.pcrm.org

1R Institute, Brazil (£40,000)
The 1R Institute of Promotion and Research for the Replacement of Animal Experimentation is in contact with students in Brazil to spread the non-animal resources and also to promote new alternative methods for education and research projects.
http://www.Instituto1R.org

People for Animals, India (£10,000)
People for Animals strongly believe that the sacrifice of millions of lives in laboratories is entirely unnecessary. They were instrumental in establishing a regulatory body (CPCSEA) that resulted in a 30% reduction in the use of animals in the Indian medical industry.
http://peopleforanimalsindia.org

Mojo Mathers MP, New Zealand
A Green Party MP, Mojo Mathers has been a leading figure in the political campaign to ban cosmetics testing on animals in NZ. Mojo very kindly declined the financial part of the Lush Prize for Lobbying, allowing the judges to reward that money to an additional Young Researcher to assist their career in science without using animals.

Winning in 2014 gave the NZ AVS the funds to develop new projects to protect animals in Aotearoa. Tara Jackson encourages anyone working to end animal testing to nominate for a Lush Prize.

The International Council on Animal Protection in OECD Programmes (£40,000)
For their successful work with the OECD, now a world leader in the promotion of non-animal methods, approaches and policies.
http://www.icapo.org/

The Swedish Fund for Research Without Animal Experiments (£10,000)
For their work with Swedish regulators to replace animal testing.
http://www.forskautandjurforsok.se

Federation of Indian Animal Protection Organisations (FIAPO), India (£5,000)
For their research and lobbying on animal testing in India
http://www.fiapo.org

People for the Ethical Treatment of Animals (PETA) India (£5,000)
For their work with Indian regulators on a cosmetics testing ban
http://www.petaindia.com 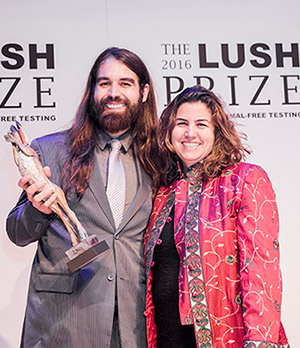