You are in: Home » Blog » Lush Prize – How to nominate

Lush Prize – How to nominate 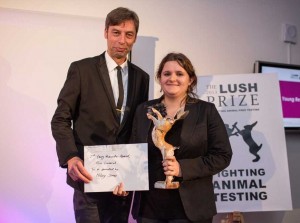 There are five categories of award:
Public Awareness – rewarding individuals or organisations raising public awareness of ongoing animal testing
Lobbying – rewarding the work of individuals, groups or organisations pushing for change, focusing on policy interventions promoting the use of alternatives
Science – individuals, research teams or institutions conducting work on relevant toxicity pathways
Training – individuals, teams or organisations involved in training others in non-animal methods
Young Researcher – young scientists (up to 35 years at the time of application) with a desire to fund the next stage of a career focussed on an animal-test free future

Don’t forget – all nominations must be received by 25th July 2014. Good luck!