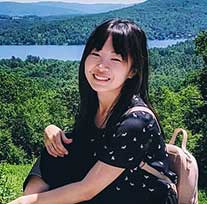 Kai is the Lush Customer Judge for Lush Prize 2020.

Kai-Chuan Tang is a Berlin-based Taiwanese blogger and reporter, who dedicates herself to sharing ideas of building a conscious lifestyle.

During the progress of becoming a cruelty-free practitioner, she realised the lack of Mandarin information is the key reason why the value against animal testing is way overlooked in Taiwan, Hong Kong, China, Malaysia, Singapore and other Mandarin-speaking countries/regions.

To raise the public attention to this topic, she launched the website “Chipmunkai × Cruelty-free” in 2018, which soon becomes an irreplaceable cruelty-free resource to the massive Mandarin users and also makes her one of the pioneers promoting this precious value in eastern societies.