You are in: Home » Blog » Interview with Lush Prize trophy creator Nichola Theakston

Nichola Theakston is the artist behind our new striking Lush Prize trophies (pictured below). Since studying fine art at university and completing an MA in ceramics, Nichola has been sculpting animals alongside raising a family. Below Jenny Nelson interviews the artist about her work. 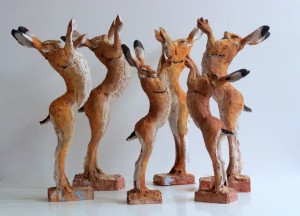 Which piece are you most proud of?

The body of work I have been most pleased with is a series of  lifesize sculptural portraits of Lowland Gorillas. This work has been evolving over the past few years.

Beyond the obvious appreciation of form I hope that the work elicits a personal and varied response from issues of fragility of existence to less tangible and more ephemeral ideas.

The notion that an individual creature may experience some spiritual dimension beyond its instinctive animal behaviours is the premise behind much of my work, and portraiture is often the vehicle I use to explore feeling and expression. As a sculptor of animal subject primates are an interesting and compelling choice of subject in their genetic proximity to human kind, and it is important to me that they are sculpted with sensitivity and empathy inviting the viewer to relate and reflect. 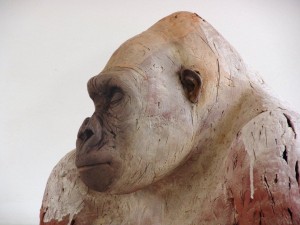 What is it about animals that inspires you to create art?

Human beings have a rich history of artistic engagement with the animal world for a variety of purposes. For me it is the astounding beauty of the natural world and my physical response to it; an attempt to understand and portray creatures that are so different and yet similar in many aspects of our mammal behaviours. It seems a very relevant activity with the list of critically endangered animals continually growing.

I exhibit at several major art fairs including London Art Fair and regularly have work selected and commended for the David Shepherd Wildlife Foundation’s annual ‘Wildlife Artist of the Year’ Exhibition in London, who’s sole purpose is to raise money for many conservation projects across the globe. 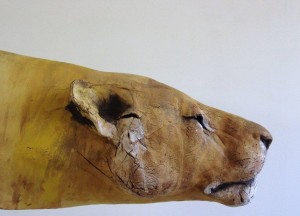 How do you feel about being associated with the Lush prize?

Honoured, excited and initially extremely nervous as I hadn’t taken on such a major commission before, and as last year was the inaugural awards and I think Lush were very much feeling their way as well!

I’m Very pleased to be associated with Lush and their ambition to reward and promote the varied work of people in the field aiming to end the use of animal testing in our world.

Lush have been delightful to work for… incredibly relaxed and personal and not at all corporate! I think they have understood the importance of allowing the artist freedom to create and I think to that end have put great trust in me. I don’t really think they knew what they were getting until quite late on in the process when I was able to send images of the first of the hare trophies. 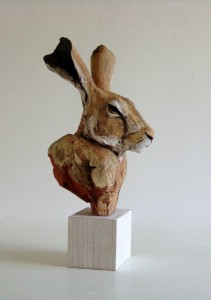 Each sculpture/award is individually made from scratch from terracotta paperclay. The earthy warmth of the material combined with an painterly, expressive and colourful finish I think reflects some of the qualities I associate with Lush products.

I live in rural north lincolnshire where thankfully hares are plentiful and always a delight to see on a daily basis.