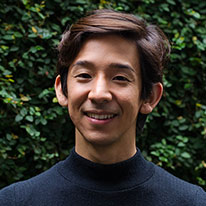 Lush staff member judge (every year Lush selects one member of staff to act as an additional independent member of the judging panel).

Since 2015, Kelvin has been working in LUSH Brazil.

His first position was as a sales assistant in Jardins Shop Spa. Due to his passion for the brand values, products, and people, Kelvin quickly became the in-store trainer. A few months later he started at the Regulatory Affairs team.

Kelvin have been acting as a Champion for Lush Prize in Brazil and so far has visited the shops for training in our Fighting Animal Testing cause, have carried out weekly notes in the Customer Service newsletter and the Brazilian Staff Room Facebook group.

In addition to his will to end animal testing, he promotes acts of sustainability at the office and manages the team to organise and to send donations of products to NGO and other institutions.

As an Oceanographer, with a Masters in Biotechnology and a future Pharmacist and Biochemist, Kelvin’s academic career has provided the necessary background to research alternative methods to animal testing and how Brazilian regulation is working to progress heading international organisations and laws.