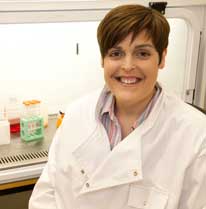 She is currently a feature scientist on the BBC children’s science television show called ‘Operation Ouch!’