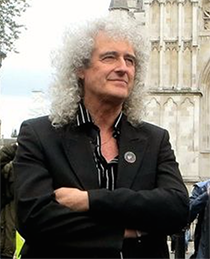 Brian May, CBE, PhD, FRAS is a founding member of Queen, a world-renowned guitarist, songwriter, producer and performer, also a Doctor of Astrophysics, 3D stereoscopic photographic authority, campaigner for animal rights and a passionate advocate for political and social change.

Brian retains his keen passion for Astronomy and after a 30 year break returned to Astrophysics to update his doctoral thesis on the Motions of Interplanetary Dust and achieved his full PhD degree from Imperial College, London, in 2007.

He continues his work in Astronomy and in July 2015 spent time with fellow Astrophysicists at NASA Headquarters interpreting new data as it was transmitted from the Pluto New Horizons probe whilst compiling the first high-quality stereo image of Pluto.

A lifelong advocate of animal welfare, Brian is a leading inspiration in the fight against fox hunting, trophy hunting and badger culling. He campaigns tirelessly from grass roots through to parliamentary level with his Save Me Trust campaign and is vice-president of the RSPCA.

Brian is proud to be an ambassador for the Mercury Phoenix Trust, set up in memory of Freddie Mercury to support AIDS projects. Over 700 projects and millions of people have benefitted from the Trust as the global battle against HIV/AIDS continues.