You are in: Home » Blog » Lush Prize at toxicology conferences 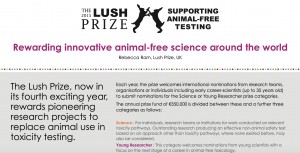 Lush Prize has had a busy couple of weeks in September, attending back-to-back toxicology conferences in Portugal and Austria. At EUROTOX 2015, the 51st Congress of the European Societies of Toxicology we engaged with researchers and toxicologists to inform and raise awareness on the six Lush Prize categories, all aimed at eliminating the use of animals in toxicity testing. We presented a poster entitled ‘The Lush Prize – Rewarding innovative animal-free science around the world’.

Our abstract submission is published in the official journal of EUROTOX 2015, Toxicology Letters.

The aim of the poster was to provide an informative overview of how researchers can get involved with the Lush Prize, which awards a yearly total of £250,000 in international funding and apply as a nominee for a funding award across any of the prize categories: Science, Training, Young Researcher, Lobbying, Public Awareness and the sixth category – the Black Box Prize, which in any one year may award the full £250,000 to a breakthrough in progress towards animal-free toxicology.

The theme of EUROTOX 2015 was ‘Bridging Sciences for Safety’. While much of the conference and exhibition focussed on conventional methods of toxicity testing using animals, there were some key sessions on the 3R’s, incorporating the specific aim of the Lush Prize – replacement. One particularly interesting session was a debate (between representatives from ECVAM and Procter &Gamble) on in-vitro methods which are available now and ready to be relied upon for human safety.

We again presented our poster and discussed the Lush Prize with potential nominees, researchers and key figures in the field of alternative, non-animal methods. Attendees were very interested to hear about the Lush Prize and how they can nominate their own work, or that of others.

Key presentation sessions at Linz included ‘Replacement’, ‘Multi-Organ Chips’, ‘3D Models’ and ‘Young Scientist Short Lectures’, as well as a session on ‘Risk Assessment based on the AOP concept’. This is of particular relevance to this year’s Lush Prize conference and awards ceremony, which will focus on AOPs (Adverse Outcome Pathways) in toxicity testing, to be held on 20th November 2015 in London.