In September 2015, we will be presenting this year’s Lush Prize poster ‘Rewarding innovative animal-free science around the world‘ at two European conferences.

Please drop along to see us and discuss how we can support your initiatives to end animal testing. 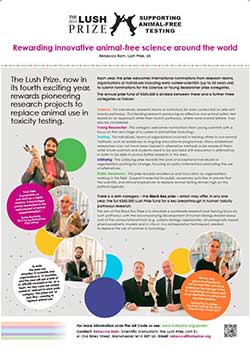 The poster provides an overview of how the Lush Prize works, the projects and research it funds and how nominees can get involved.

The research conducted for the poster is expected to be published later this year.

Each year, the Lush Prize awards £250,000 (350,000€) to initiatives working to end the use of animals in toxicology testing for consumer products and ingredients.

There are five categories of award:

Alternatively, The Lush Black Box Prize offers, in any one year, the full £250,000 for a key breakthrough in human toxicity pathways research.

What’s different about the Lush Prize?

1R not 3Rs:
Many regulations and prizes are directed towards the broader idea of the 3Rs: reduction, refinement, and replacement of the use of animals. The Lush Prize, as a project driven by animal ethics, seeks only to support projects working on the complete replacement of animal tests.

Largest prize fund:
At £250,000 every year, the Lush Prize is the largest annual financial reward in its field.

How to get involved

Nominations open for the Lush Prize open in April each year. You can nominate your own work or that of another organisation or individual. Judging is carried out by a panel of experts from around the world – scientists, politicians and campaigners.

Winners participate in a conference, can have their work published in a special edition of the peer-reviewed journal ATLA (see 2014 edition) and attend a fantastic awards ceremony in London.

See full details of the prize categories and how to nominate.

Nominations have now closed for the 2015 Awards so sign up for our e-newsletter to be kept informed of the opening of the 2016 Prize.

On Friday 20th November 2015 we are holding a daytime conference in London on the theme ‘Adverse Outcome Pathways- what, how and where next?’ at RIBA (Royal Institute of British Architects) in London.

The conference will discuss key developments in adverse outcome pathways and how they offer the potential to greatly improve prediction of health effects and end the use of animals in safety (toxicity) testing.

Places are free but space is limited,so early booking is recommended – register your place for the conference here.

The conference will be followed by the Awards Ceremony of the Lush Prize 2015 (this event is by invitation only).

“Lush Prize is proof that we can work for a better science. It encourages young researchers in the replacement of animal experimentation.”

“Being awarded the Lush Prize has allowed us to expand and plan new campaigns to end animal testing that we wouldn’t have been able to do otherwise.”

“We are very proud and thankful to win the Lush Prize. Our lab is working on the concept of Tox-21, combining cell culture work as an alternative to animals with big data analysis. “

“Not only did the Lush Prize provide us with recognition for the work our group has done, it has assisted us to be a stronger force in our future campaigning. It has been a huge boost for us financially, and has given us the confidence that there is corporate support for an important ethical issue despite the vested interests that we are faced with on a daily basis.”

“We run two centres on both sides of the Atlantic, on alternatives to animal testing and developing the science and this is why this award is really helpful.”

“The Lush Prize gives a very generous amount of money to groups and individuals who are doing great work in trying to end animal testing. Both the recognition and the donation that comes along with being a prize winner makes it one of the most coveted awards. I hope more people will get involved and join in on the fight to end animal testing and to celebrate the efforts happening around the world.”