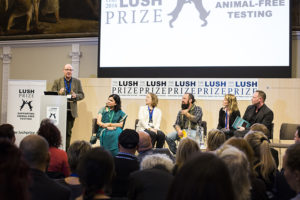 This year we have made some changes, based on feedback and other events happening around the world, which means we will not be holding a conference again this time.

In August the Lush Prize Team presented at World Congress 10 on alternatives to animal experiments, held in Seattle as this international conference, held every three years, is one of the most important events in the animal-free testing calendar. This means that we are not holding a Lush Prize Conference this year.

Whilst last years satellite awards events were very enjoyable it did mean that the Young Researcher winners missed out on the networking opportunities of the London event. This year we have included them in our awards ceremony in London on 10th November to ensure they benefit from networking with other winners from around the world.

Another event that you may not be aware of that proved very useful was the networking seminar for the winners that happened last year, in the morning of the awards ceremony. This gave each winner time to discuss their project with their peers, which served as a useful networking event in itself. We will be holding this lunchtime seminar again this year, including our Young Researcher guests from Asia and the Americas.