The Young Researcher Awards encourage young scientists to develop a career in toxicology without harming animals, by offering bursaries to allow them to advance in this area.

We present the five winners: 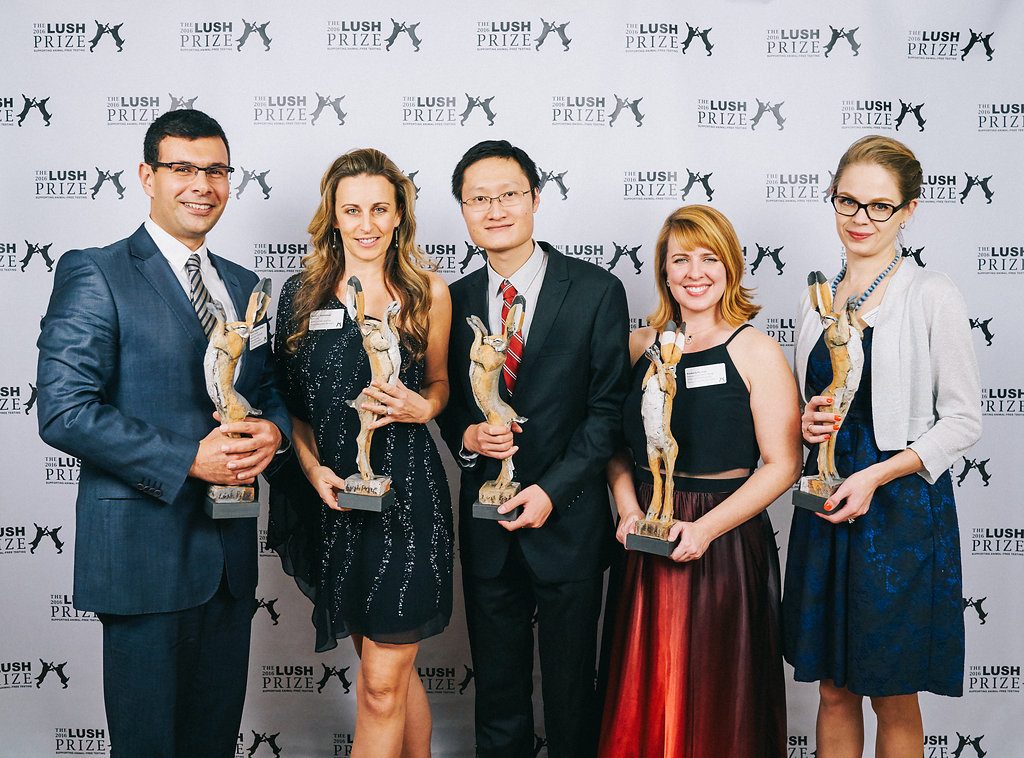 Using this platform, he successfully recreated acute inflammatory exacerbations in chronic obstructive pulmonary disease (COPD) – the third leading cause of deaths in humans worldwide, and tested therapeutic efficacy of a pre-clinical experimental compound).

Moreover, he engineered a new in vitro model system that permits analysis of the effects of whole smoke, from both conventional tobacco and electronic cigarettes, delivered under physiologically relevant flow conditions that mimic breathing on the pathophysiology of mucociliated human bronchiolar epithelium cultured in the microfluidic small airway-on-a-chip – i.e. an animal-replacing platform for ‘inhalation toxicology’.

Using the smoking lung chip Kambez was able to study the potential toxic effects of electronic cigarettes in a way not possible in animals or other in vitro culture models, and to identify a unique set of genes that distinguished differential responses to inhaled whole smoke in COPD epithelium compared to healthy normal lung tissue.

Cardiovascular diseases (CVD) are the leading cause of death in the United States. Endothelial dysfunction and damage to arteries’ lining are well-recognised as critical players in the onset and progression of vascular diseases. Increasing evidence suggests that many therapeutic agents and environmental toxicants have toxic effects on the vascular system and endothelium.

However, it is often challenging to establish mechanistic relationships between exposure to toxicants and vascular pathology. Therefore, it is important to identify those chemicals and drugs that induce biological responses in endothelial cells and understand their mechanism of action. We are developing a screening platform using human primary Endothelial Colony Forming Cells (ECFCs).

These cells are genetically unmodified, highly proliferative and donor-specific, maintaining individual’s genetics/epigenetics, and they are critical to the maintenance of vascular integrity. The proposed platform will be comprised of:
1. A library of human primary Endothelial Colony Forming Cells (ECFCs), isolated from 20 patients;
2. High throughput screening multiplex test for reactive oxygen species (ROS) production and viability assessment in response to a library of toxicants using high content imaging.

The major advantage of this platform is versatility. The libraries of ECFCs and toxicants can be expanded allowing broader epidemiological and toxicological studies. Moreover, since ECFCs are donor-specific, this can open a new door to personalised toxicological screening.

For example, a virtual tissue model that she built to simulate embryonic vascular development is now being used in conjunction with HTS data and life-stage specific pharmacokinetic mathematical models to screen thousands of chemicals for potential developmental toxicity hazard.

Nicole was a key contributor to a strategy that combines HTS data with computational models for measuring estrogen receptor bioactivity, which resulted in regulatory acceptance of a HTS and computational method as an alternative to existing animal-based tests in the Endocrine Disruptor Screening Program, including the rodent uterotrophic assay.

Presently, she is the cross-agency project lead on developing a similar strategy for integrating HTS data on the androgen receptor pathway into a computational model to screen chemicals for anti/androgenic activity, with the near term goal of replacing the rodent Hershberger assay.

Work that Nicole presented at a recent international workshop formed the basis for achieving consensus among regulators that the animal test for skin sensitisation is ready for replacement.

Her group is currently developing roadmaps to address the replacement of animals for acute toxicity endpoints used by regulatory authorities worldwide, and formulating long-term strategies to address complex toxicological endpoints like cancer.

A key aim for Kimberly’s research is to optimise animal-free methods to distinguish skin sensitisers from respiratory sensitizers.

The Direct Peptide Reactivity Assay (DPRA) is an in chemico assay that identifies dermal sensitisers based on their reactivity with peptides containing either lysine (Lys) or cysteine (Cys). Since the DPRA models the first key event (protein reactivity) in the Adverse Outcome Pathway (AOP) of both skin and respiratory sensitisation, it has also been investigated for its ability to identify respiratory sensitisers.

Using this bursary from the Lush Prize, Kimberly proposes to experimentally evaluate a set of test chemicals, including known respiratory and skin sensitisers, in the DPRA, then separately evaluate reactivity with Lys- and Cys- peptides and assess preferential reactivity by determining the ratio of Lys to Cys depletion.

The individual Lys- and Cys- peptide reactivity, mean reactivity, Lys:Cys ratio will be evaluated and form the basis of an empirically derived prediction model to aid in the discrimination of respiratory sensitisers from skin sensitisers.

The project is based on the development of the multi-material bioprinting system for engineering biomimetic human tissue and organ models.

Recent advancements in bioprinting technologies have significantly improved our capability to fabricate biological tissues through bottom-up assembly of biomaterials and cells. Nevertheless, most of the current modalities are limited to the use of a single bioink during each deposition process, rendering it difficult to achieve bioprinting of sophisticated compositional structures.

To this end, Yu Shrike Zhang proposes to develop a novel multi-material bioprinting platform that is capable of depositing multiple coded bioinks in a continuous manner with extremely fast and smooth switching among different reservoirs, for rapid fabrication of complex structures.

Specifically, a single printhead consisting of a bundle of equal-sized capillaries, each connected to a unique bioink reservoir that can be individually actuated by digitally controlled pneumatic pressure, will be mounted to the bioprinter.

The ejection process, when synergized with the movement of the motorized stage, allows for rapid deposition of 3D patterns and architectures composed of multiple desired bioinks in a spatially defined manner, at a speed at least one order of magnitude faster than existing modalities.

This innovative strategy is likely to advance the field of bioprinting by offering unprecedented capacity in printing speed and continuity, which is compatible with a wide variety of bioinks suitable for construction of biomimetic tissue models featuring much higher compositional and architectural complexity than those that achievable with any existing bioprinting techniques.

The awards were presented at a special ceremony in Vancouver: