You are in: Home » Uncategorized » Skin sensitisation alternative testing approved by OECD 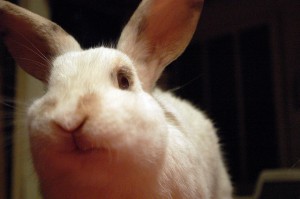 An in-vitro toxicity test that saves animals’ lives by using human cells, has been approved by the OECD working group of the national coordinators of the test guidelines programme (WNT).

The human cell line activation test (h-CLAT) for skin sensitisation measures activation by a substance of specific cells in the skin (known as dendritic cells), which play an important role in activating the body’s immune system in response to a chemical. In skin sensitisation, this is shown by symptoms such as redness, allergy and inflammation.

The EU Reference Laboratory for Alternatives to Animal Testing (EURL Ecvam) had previously validated the h-CLAT test for use last year.

There are three key stages to the skin sensitisation reaction and in modern toxicology this is known as an Adverse Outcome Pathway (AOP). The h-CLAT test is key to the third and final stage. Other non-animal tests have already been approved which link to stages one and two of the skin sensitisation AOP; they are the Direct Peptide Reactivity Assay (DPRA) and KeratinoSens Assay which were approved by the OECD in 2015.

In 2015, Lush Prize awarded several winners the Black Box prize for their outstanding work on the skin sensitisation AOP. You can read more about this here.

The approval of the third test at OECD level marks a major breakthrough in recognising how non-animal technologies not only save hundreds of thousands of mice, rats, rabbits and guinea pigs from painful and unnecessary tests, but are far more scientifically reliable in assessing human response to chemicals. The various annexes of major EU chemicals testing regulation REACH have resulted in thousands more tests on animals since its launch in 2007.

However, the REACH Committee has now backed a draft regulation requesting that validated non-animal tests will become the default information requirement, for assessing whether chemicals have the potential to cause skin sensitisation. This is of critical importance as REACH continues until 2018. The draft has yet to be formally adopted and approved.

Approval by the OECD must now be followed by industry making full use of the h-CLAT test to demonstrate its superiority over animal testing.

To find out more about the Lush Prize and the skin sensitisation adverse outcome pathway, click here.