You are in: Home » Blog » New Zealand Bans Cosmetic Tests on Animals 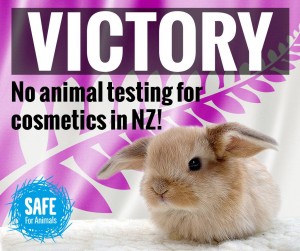 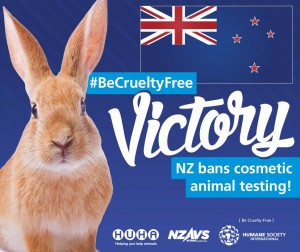 New Zealand has become the latest country to ban animal testing of cosmetics. The announcement was made at the end of March and is being introduced under the new Animal welfare Act.

The ban comes after strong and co-ordinated lobbying from a number of organisations including SAFE, NZ Anti-Vivisection Society, HUHA and HSI. Taking the campaign forward in Parliament was Green Party MP Mojo Mathers.

Both SAFE and NZAVS have won Lush Prizes for Public Awareness and Lobbying campaigns for their work to end animal testing in the country. SAFE used the funding from the Prize to produce a mobile phone app which allows consumers to quickly and easily find cruelty-free products.

The ban so far only applies to testing within New Zealand and means that imported cosmetics are still potentially tested on animals abroad.

SAFE head of campaigns, Mandy Carter, said that “with a ban on cosmetics testing in place”, the organisations “will now focus attention on achieving a ban on the import and sale of animal-tested cosmetics.  The European Union already has such a ban in place and it is logical for New Zealand to follow”.

The ban is the latest in a growing global cruelty-free trend, with similar test bans already in place in Norway, Israel, India, the 28 member states of the European Union and the Brazilian state of São Paulo. Legislative measures are also under discussion in Australia, Brazil, South Korea, Taiwan and the United States.