You are in: Home » Blog » ‘Mini Organism’ may put an end to animal testing

‘Mini Organism’ may put an end to animal testing 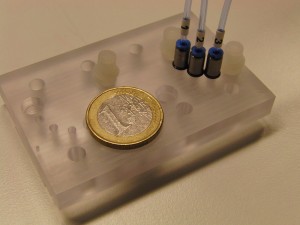 The chip (about the size of a 1 EURO coin) has been developed in Germany by researchers at the Fraunhofer Institute in Dresden and the Institute for Biotechnology in Berlin. The ‘mini organs’ are connected via tiny microfluidic channels to realistically mimic the human circulation, which, despite promising progress, has proved a challenge in previous cell-based (in-vitro) models. The chip is already used by some cosmetic industry companies and is planned for further use in both drugs and cosmetics testing. The ‘mini organ’ chip realistically represents the human system at a ratio of 1:100,000 and is considered more reliable than tests in rats or mice which cannot accurately predict results in humans.

Human cells from various organs can be applied to several positions within the chip. Because of its ability to realistically show how the body reacts to toxic substances as a whole system, the technology has exciting potential to save thousands of animals such as mice, rats and guinea pigs from the pain and suffering of toxicity tests, during which they may be force fed, injected or have substances smeared on their skin. As well as animal ‘models’ being unreliable in predicting responses in humans, the doses of chemicals used are unrealistically high and do not reflect human exposure levels.

More than one million animals suffer in such tests each year in the EU alone.

For further information on the mini-organ chip, click here.