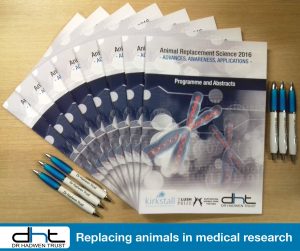 The theme of this year’s conference, the third hosted by the DHT, was ‘Advances, Awareness, Applications‘.

Lush Prize sponsored the event again this year, which included a full day of presentations from across UK academia showcasing their outstanding work in developing in vitro and human based methods to replace the use of animals in a number of areas including intestinal toxicity, immunology, brain tumours, skin wound healing, neurological function, pathology, drug screening and leukaemia.

The DHT is the UK’s leading charity funding non-animal medical research, helping both humans and animals. Its mission aligns closely with that of the Lush Prize, which rewards efforts to focus on the 1R, or replacement of animals in safety testing and research, each year recognising achievements in the fields of science, training, lobbying, public awareness and young researcher initiatives in ending animal testing.

In 2016, the Lush Prize celebrated the achievements of 20 winners across Europe, the Americas and Asia.

For more information on the DHT and the Animal Replacement Science Conference visit http://www.animalreplacementscience.com/