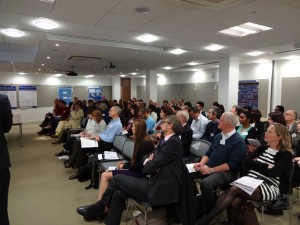 The theme of this year’s conference, the first hosted by the DHT (Dr Hadwen Trust), the UK’s leading non-animal medical research charity, was ‘Improving relevance to human disease – challenges, innovations and applications’. Attendees heard presentations and viewed posters from a wide variety of disciplines focussed on the replacement of animals in biomedical research. DHT aims for the ARS conference to be the first of many.

Lush Prize was one of the event’s key sponsors, which included presentations from senior researchers and experts in animal replacement models from several academic institutions across the UK, as well as organisations such as the Physicians Committee for Responsible Medicine (PCRM) and the Safer Medicines Trust. Topics of presentations included innovative human tissue models, non-invasive imaging methods and replacement of animals in the study of human psychosis and Alzheimer’s disease, as well as others.

The day was structured to focus on the challenges, innovations and applications of animal-replacement technologies, with a fully pragmatic approach to their current limitations. There was an exchange of learning on overcoming the knowledge gaps that currently exist, as well as promoting open sharing of information and expertise, to not only develop novel non-animal methods, but also break down barriers and attitudes between the non-animal research community and those that continue to rely on animal testing.

This was highlighted in an interesting panel-led discussion which provided insights into the obstacles to replacing animals in research – not only scientific, but political and bureaucratic. For example, issues highlighted by several speakers included a lack of access to (but crucially, not availability of) a variety of human tissues for research, coupled with the conventional attitude in the research community that animals are still the ‘right’ model, even when compared to far more relevant, human-based research.

The aim of the DHT is to achieve a paradigm shift in the development and acceptance of replacement models to animals, whilst demonstrating that such models not only advance medical research but enhance human safety. The main objective is to achieve a scientifically robust and completely animal-free ‘tool box’ of research methods, which can be applied where animals are currently used, not only in toxicology but basic research and drug discovery.

These aims align with the criteria of the Lush Prize, which also rewards only those methods of research which fully replace the use of animals. The Prize recognises achievements in the fields of not only scientific research, but outstanding projects by young researchers, as well as training, lobbying and public awareness.

As one of the key sponsors of the conference, attendees were invited to visit our exhibition stand to find out more about Lush Prize’s 2014 winning projects and new activities going forward as the Prize enters 2015, its fourth exciting year.