You are in: Home » Blog » Lush Prize presents at Japanese conference on alternatives 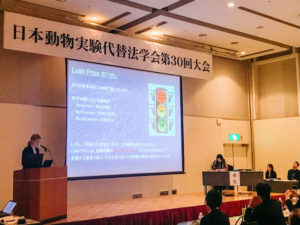 Lush Prize is delighted to have been the guest speaker, for the second year running, at the 30th Annual Meeting of the Japanese Society for Alternatives to Animal Experiments, held in Tokyo on 23-25th November 2017.

We opened day one of the congress by presenting an overview of the Prize and some of the latest trends in alternatives to animal testing to over 200 scientists. We received great interest, networking with attendees after the talk who were very enthusiastic about the prize. Also presenting was Kumiko Tatsumi, 2016 Young Researcher Asia prize winner, who showcased her award winning work. 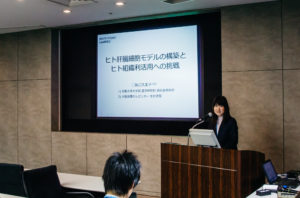 On day two, we held a Lush Prize media session, kindly arranged and chaired by Lush Japan. The audience included journalists from both science media and social justice backgrounds. Presentations were also given by Sachiko Azuma, Director of NPO Peace, an organisation campaigning for greater protection of animals in Japanese labs for over 20 years. Talks were also given by this year’s Young Researcher Asia Prize Winner, Dr Satoshi Koyama and 2016 winner Kumiko Tatsumi. 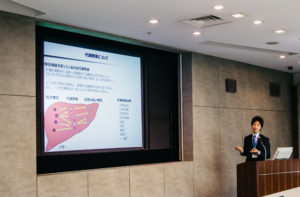 We also prepared a poster which was on display throughout the congress and the Lush Japan team also set up an eye-catching information booth showcasing videos from the 2017 awards, as well as displaying one of the fantastic, one of a kind, hand crafted Lush Prize hare sculptures, that every winner receives.

The third and final day of the congress saw a range of symposiums which included presentations from both senior and young scientists, all interested in alternative technologies to animal testing, the ethical and legal issues, as well as challenges in use of animals and replacement with human-relevant technologies. Day 3 also included a session on the topic of ‘1R works: Replacement alternative methods to animal testing’, hosted by Hiromi Kamekura, from 2012 Lush Prize winning organisation JAVA (the Japanese Anti -Vivisection Association).

It is understood from the congress organisers that many of this year’s attendees have a specific interest in ‘1R’ methods – replacement of animal testing, the core mission of the Lush Prize.

Lush Prize was delighted to participate and would like to thank Lush Japan and Dr Hajime Kojima and the JSAAE congress organisers, for their invaluable help and support.