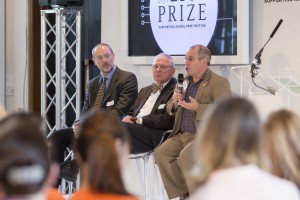 Every year Lush Prize organises a scientific conference around the issues of animal testing and what can be done – and is being done – to end it. Previous conferences included discussion on the issue of complete replacement (rather than reduction) of animal experimentation and Adverse Outcome Pathways and their potential to greatly improve prediction of human health effects and end the use of animals in toxicity testing.

In just a few years the Lush Prize Conference has established itself as an important event within the conference circuit, unique in its focus on completely replacing animal use in labs. It is also unique in that it seeks to bring together scientists and campaigners who would not normally share a platform.

All winners of the Lush Prize, across all categories of science, training, young researcher, lobbying and public awareness, from across the world, have the opportunity to talk about their projects. We also bring in keynote speakers who are experts in their fields.

With Lush Prize’s focus on chemical (toxicology) testing, and with 2018 being a key deadline in Europe for testing thousands of chemicals in use today (under the REACH regulations), this year’s conference will look at the future of animal use in regulating chemical safety. We will be addressing how campaigners, companies, scientists and regulators are responding.

As a global prize, we will be looking at chemical safety on a worldwide level, not just European, and speakers will discuss the situation in other jurisdictions and what collaboration is taking place to end animal tests.

The US Senate, for example, recently approved a far-reaching bill to overhaul government regulation of toxic chemicals that could better protect the environment and public health from harmful substances as well as reduce animal testing. With animal use being increasingly recognised as unreliable in predicting effects on humans, governments worldwide are seeing the need to support and implement in-vitro methods of research.

The Lush Prize Conference is free to attend and limited public tickets are available – click here.