Lush Prize was at EUROTOX 2018 in Brussels to promote the 1R (replacement) of animals in safety testing.

EUROTOX is a major European toxicology conference held annually. The conference includes both traditionally used animal methods and an increasing focus on non-animal approaches and this year’s theme was ‘Toxicology Out of The Box’.

Many previous winners of the Lush Prize were in attendance and presenting their work.

Representing the Prize was our scientific consultant Rebecca Ram, and here is her diary from the event.

A very packed four day agenda for the conference opened on Sunday, with sessions on a variety of topics including a number of non-animal approaches including in silico (computer modelling) initiatives, application of non-animal data in toxicokinetics and organ specific in vitro methods, as well as read across use in REACH.

A keynote session on day two  was a debate entitled ‘Adverse Outcome Pathways are the future for regulatory toxicology ‘ between Brigitte Landesmann of EUROTOX (for the motion) and Daniel Villeneuve of the SOT (Society of Toxicology) speaking against the motion.

Both speakers presented very interesting talks and after an audience vote it was considered that the debate was won in favour of AOPs being a key factor in the future of regulatory toxicology. The session was attended to near maximum capacity of several hundred attendees, demonstrating the increasing interest and discussion of AOPs.

Other sessions on day two included ‘Organs on a chip in toxicology- is the end of animal testing near?’ with presentation of work on the development of OoC models of e.g. thrombosis and the GI tract, as well as many other sessions.

Tuesday included ‘Ecotoxicology and toxicology- bridging the gaps’ with focus in two separate sessions on ‘models and frameworks’ including pathway based approaches and ‘contemporary challenges’ . Further sessions are also devoted to ‘Adverse Outcome Pathways and development of alternative methods’.

Another well attended key presentation was hosted by Cosmetics Europe entitled ‘Five years after the ban: can regulatory safety assessment of cosmetics ingredients be performed based on non-animal methods and approaches?’

The final day of EUROTOX had lectures on ‘How modern toxicology serves society’ by former Lush Prize winner Dr. Thomas Hartung; a presentation from OECD on ‘Is global chemical policy reaching its goals?’ and a range of other topics from cutting edge 3D liver, lung, kidney and BBB(blood brain barrier) on a chip models, to skin models used to predict skin sensitisation (allergy) to determine the safety of a range of substances, from everyday applications such as tattoo inks, to industrial chemicals and drugs.

The closing keynote lecture of the congress was on ‘Big data for biologists; a maths in medicine case study’. The forward thinking, yet logical concept of ‘big data’ promotes the large scale review (also termed ‘data mining’) and use of vast libraries and publications of existing data.

Lush Prize prepared an abstract for inclusion in the official congress publication, as well as a poster presentation –  download the poster. 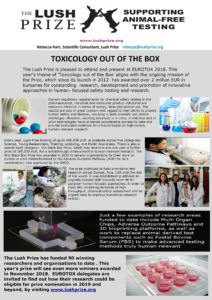 Whilst EUROTOX clearly includes significant content on traditional toxicology and use of animals, as well as presentations and exhibitor organisations who use, breed and supply animals ranging from mice to rabbits, dogs and non-human primates, it is encouraging to see the increasing recognition that more human relevant approaches must be adopted to overcome both scientific and ethical challenges – a message the Lush Prize continues to promote and support.