You are in: Home » Uncategorized » Conference Speakers 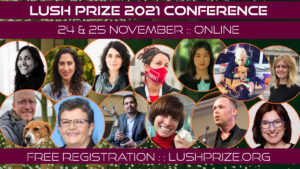 Speakers at the Lush Prize 2021 Conference

Aysha Akhtar, M.D., M.P.H., is the Co-founder, President, and CEO of the Center for Contemporary Sciences, which is pioneering the transition to replace animals in experimentation with superior human-based testing methods. A military veteran, she is a double-board certified neurologist and preventive medicine specialist, with a background in public health. Previously, she served as Deputy Director of the U.S. Army Traumatic Brain Injury Program, developing the Army’s brain injury prevention and treatment strategies for soldiers. As a Commander in the U.S. Public Health Service Commissioned Corps, Dr. Akhtar frequently deployed to assist with national public health emergencies.

For a decade, Aysha was a Medical Officer at the Food and Drug Administration, most recently in the Office of Counterterrorism and Emerging Threats.

Day Two. Panel 3: What Role Can the Public Understanding of Science Play in Ending Animal Testing?

Presentation: Why We Need to Change the Narrative on Animal Testing

Elizabeth Baker, Esq., is the Regulatory Policy Director for the Physicians Committee for Responsible Medicine. Elizabeth has authored numerous science blogs, regulatory petitions, regulatory comments, op eds, and manuscripts regarding regulatory policy and innovative human-based science. She is a member of the California Bar Association, the American Society for Cellular and Computational Toxicology, the Society of Toxicology, the European Society for Alternatives to Animal Testing, and the Parenteral Drug Association.

Dr Luísa Bastos is the Animals in Science Programme Leader at Eurogroup for Animals, where she coordinates a working group of 30 European NGOs and participates in EU fora to promote a transition to non-animal science. Previously, she was Principal Investigator of the modelling and simulation research group at the Institute of Research and Innovation for Healthcare, and Invited Professor at the University of Porto. She is specialised in in-silico modelling of human physiology and pharmacology for healthcare education and training.

This year, she coordinated the working group of the European Parliament Intergroup on the Welfare and Conservation of Animals, Chaired by MEP Tilly Metz, leading to the adoption of a Resolution calling on the Commission to draw up an action plan to actively phase out the use of animals in science.

As an animal advocate, she has influenced laws and policies restricting the use of animals in entertainment and education, and the breeding of animals for scientific procedures.

Day One. Panel 2: Creating Awareness Amongst Regulators and Legislators

Luísa will take the place of Tilly Metz on the Q&A panel discussion for this session.

Aryenish Birdie is the founder and executive director of Encompass, a nonprofit working to make the animal protection movement more racially diverse, equitable, and inclusive. Prior to Encompass, Aryenish spent seven years at the Physicians Committee for Responsible Medicine promoting alternatives to animal tests.

Aryenish received a degree from Hampshire College in critical social thought/race and feminist theory and a Master’s in Public Management from Johns Hopkins University.

Camila Cortínez is the General Director and Founder of ONG Te Protejo, Chile. Camila has more than ten years of experience in project management and development, and in leadership of non-governmental organisations. She has been selected as a young entrepreneur in Youth Action Net Chile, Young Leaders of “El Mercurio” and Young Leaders of the Americas Initiative YLAI. In addition, she has won, together with NGO Te Protejo, the Lush Prize 2017 Public Awareness award, and the Awards VIVA Schmidheiny as an NGO with environmental impact, in 2019, and adaptation to the crisis in 2020.

Julia is head of Unilever’s safety and environmental sciences group. She has worked on alternatives to animal testing for 30 years, starting her career with FRAME in 1991 after completing a PhD in biochemical toxicology at the University of Nottingham Medical School. Julia led the validation and regulatory acceptance of non-animal tests for skin corrosion and irritation whilst working at ECVAM, before moving to lead Unilever’s programme on product safety without animal testing.

A recipient of the prestigious Russell and Burch award in 2011 for her contributions to the advancement of alternative methods, Julia is a leading advocate for applying modern animal-free science in ensuring chemicals are safe and sustainable without animal testing.

Kathrin is a veterinary expert in animal welfare science, ethics, and law. She works at the Johns Hopkins University Center for Alternatives to Animal Testing (CAAT), where she directs the Beyond Classical Refinement Program. The Program addresses the reproducibility and translatability crises that science is facing and scrutinises current animal use practices in science. With teaching the next generation of scientists being a focus, Kathrin is involved in several international initiatives to improve and extend humane, human-relevant science education.

In November 2020, Kathrin took on an additional role as the Animal Protection Commissioner of Berlin, Germany, in which she advises the government and citizens of Berlin on various animal protection issues.

Day Two. Panel 3: What Role Can the Public Understanding of Science Play in Ending Animal Testing?

Presentation: How to Foster the Public’s Solidarity with Non-Human Animals Used in Science

In January 2019, she started her current position with Animal Rights, an animal protection group active in the Netherlands and Belgium. She coordinates the campaigns ‘Replace Animal Testing’ and ‘Animal Free Science’ for Animal Rights in Belgium.

Presentation: Why Public Awareness is the Bottleneck in Ending Animal Testing

Tilly Metz has been the Luxembourgish Member of the European Parliament (MEP) for the Greens/EFA group since 2018. Prior to this she was a teacher, a local councillor in the city of Luxembourg and, from 2005 to 2011, mayor of Weiler-la-Tour.

She serves as the Chairwoman of the European Parliament’s Animals in Science Working Group of the Intergroup on the Welfare and Conservation of Animals and is a member of several other groups, including the Committee on the Environment, Public Health and Food Safety.

Tilly is President of the Multiple Sclerosis Society of Luxembourg and a member of the National Council for the Disabled.

Day One. Panel 2: Creating Awareness Amongst Regulators and Legislators

SOKO conducted an undercover investigation in 2014 at the Max Planck Institute Tübingen, for which it won the Lush Prize for Public Awareness the following year.

In 2020, SOKO again won the Public Awareness Prize for a covert investigation at the Laboratory of Pharmacology and Toxicology in Mienenbüttel. The expose led to the lab being raided by police and having to hand over all animals to suitable third parties.

Presentation: The Role of Undercover Investigations in Exposing Animal Research

Dr Costanza Rovida is Scientific Officer at CAAT-Europe (Center for Alternatives to Animal Testing), where she is responsible for the acceptance of non-animal methods for regulatory purposes. She also works at TEAM Mastery as Senior Regulatory Specialist where she has an active role in the preparation of dossiers with risk assessment of chemical substances.

Costanza gained a degree in Chemistry and she is now listed in the European Register of Certified Toxicologists (ERT). In the period 2005-2008, she worked at EURL-ECVAM.

She has many publications in peer review journals on the theme of regulatory use of non-animal methods.

Troy has served on numerous high-level policy committees and expert groups at national and international levels, including those of the Organisation for Economic Co-operation and Development, the European Union (CARACAL, ECHA, EFSA, EURL-ECVAM), the U.S. Environmental Protection Agency, Health Canada, the New Zealand Ministry of Health, and others. He is also a member of the Lush Prize judging panel.

Borami is the Interim Executive Director and Senior Policy Manager at Humane Society International/Korea. With 14 years of experience focusing on legislative campaigns and policy changes for animal welfare and humane science, Borami has hosted numerous political and public forums with international and regional lawmakers, governments, and stakeholders. This contributed to achieving multiple policy and law reforms.

She has given presentations at government workshops and academic conferences and participated in expert meetings for animal welfare policy and advancing modern science with human-relevant approaches.

The Good Company Guide campaign that Borami led with over 40 multi/national companies, to end cosmetics animal testing, was introduced as a successful project that brought a positive contribution to society by the Seoul City NPO Centre.

Day One Panel 2: Creating Awareness Amongst Regulators and Legislators

Dr Pranjul Shah heads the University of Luxembourg Incubator, which is the hub for Innovation and Entrepreneurship. He also invented a number of award-winning technologies leading to multiple patents and numerous scientific and business awards.

Pranjul is the inventor of HuMiX gut on a chip system, which makes it possible to probe the human gut in relation to the gut bacteria (microbiome) and their role in our health and disease. HuMiX was awarded the Outstanding Scientific Publication as well as Outstanding Research-Driven Innovation awards by the National Research Fund of Luxembourg.

Pranjul won a Lush Prize Young Researcher award in 2016 and served as a Judge for the 2020 Awards.

Day Two. Panel 3: What Role Can the Public Understanding of Science Play in Ending Animal Testing? (Pranjul will take part in the Q&A session only)

Rachel Smith is the CEO of Humane Research Australia, a post she began in May 2020, following six months work as the Campaigns and Communications Manger.

Rachel holds a MSc in Animal Welfare Science, Ethics and Law from the University of Winchester, during which she undertook her dissertation project on Freedom of Information Legislation and Animal Research.

Rachel has been committed to various animal welfare causes since a young age. During her career she has worked for NGOs in the animal welfare and conservation fields, in Europe, Asia and Australia, as well as employment in the community sector for local, state and federal Government.

Dr Sonja von Aulock is editor-in-chief of the scientific journal ALTEX – Alternatives to Animal Experiments and its sister journal ALTEX Proceedings, as well as CEO of the Swiss not-for-profit society ALTEX Edition, which publishes both journals. She studied biology at the University of Konstanz, Germany, obtained her PhD in biochemical pharmacology, and led a junior research group on microbial profiling before joining ALTEX Edition as a professional editor. She is on the board of the Center for Alternatives to Animal Testing (CAAT)-Europe and on the steering committee for the Microphysiological Systems (MPS) World Summit. Under her leadership, ALTEX received a Commendation from the Lush Prize in the Public Awareness category in 2016.

Fireside Chat: Good Science in Not a Matter of Opinion