You are in: Home » Blog » What did Lewis Carroll have to say about vivisection?

What did Lewis Carroll have to say about vivisection?

At the Lush Prize awards day in November we remembered the stirring words of Lewis Carroll.

Here is an extract from his 1875 essay titled Some Popular Fallacies About Vivisection. 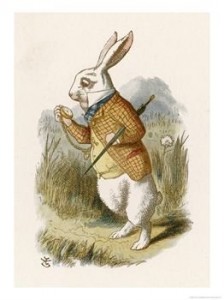 And when that day shall come.. what potent spell have you in store to win exemption from the common doom? Will you represent to that grim specter, as he gloats over you, scalpel in hand, the inalienable rights of man? He will tell you that this is merely a question of relative expediency,—that, with so feeble a physique as yours, you have only to be thankful that natural selection has spared you so long. Will you reproach him with the needless torture he proposes to inflict upon you? He will smilingly assure you that the hyperæsthesia, which he hopes to induce, is in itself a most interesting phenomenon, deserving much patient study. Will you then, gathering up all your strength for one last desperate appeal, plead with him as with a fellow-man, and with an agonized cry for “Mercy !”

No greater service can be rendered to the cause of truth, in this fiercely contested field, than to reduce these shadowy, impalpable phantoms into definite forms, which can be seen, which can be grappled with, and which, when once fairly laid, we shall not need to exorcise a second time:

– That the infliction of pain on animals is a right of man, needing go justification.

All who recognise the difference of right and wrong must admit, if the question be closely pressed, that, the infliction of pain is in some cases wrong. Those who deny it are not likely to be amenable to argument. For what common ground have we? They must be restrained, like brute beasts, by physical force.

This fallacy can be assumed only when unexpressed. To put it into words is almost to refute it. Few, even in an age where selfishness has almost become a religion, dare openly avow a selfishness so hideous as this ! While there are thousands, I believe, who would be ready to assure the vivisectors that, so far as their personal interests are concerned, they are ready to forego any prospect they may have of a diminution of pain, if it can only be secured by the infliction of so much pain on innocent creatures.

But I have a more serious charge than that of selfishness to bring against the scientific men who make this assumption. They use it dishonestly, recognising it when it tells in their favour, and ignoring it when it tells against them. For does it not presuppose the axiom that human and animal suffering differ in kind? A strange assertion this, from the lips of people who tell us that man is twin-brother to the monkey !

Grant this, and you simply paralyze all conceivable efforts at reformation. How can we talk of putting down cruelty to animals when drunkenness is rampant in the land? You would propose, then, to legislate in the interests of sobriety? Shame on you ! Look at the unseaworthy ships in which our gallant sailors are risking their lives ! What ! Organize a crusade against dishonest shipowners, while our streets swarm with a population growing up in heathen ignorance ! We can but reply, non omnia possumus omnes. And surely the man who sees his way to diminish in any degree even a single one of the myriad evils around him, may well lay to heart the saying of a wise man of old, “Whatsoever thy hand findeth to do, do it with thy might.”