You are in: Home » Blog » UK breeder of animals for labs to expand

UK breeder of animals for labs to expand 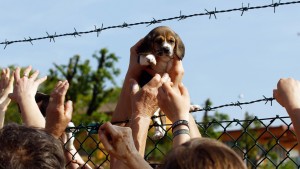 Lush Prize is gravely concerned that plans for the expansion of a facility in the UK for breeding beagles and ferrets to be used in research have been approved, despite repeatedly being refused by the local council. More than 100,000 people had signed petitions to oppose planning permission.

The expansion of the beagle and ferret facility at Grimston, Yorkshire, which will house up to 2,000 beagles at any one time, is planned by owners B&K Universal, a subsidiary of US-based Marshall Bioresource, an international breeder of animals for bioresearch. Marshall also owns the Green Hill facility in Italy which closed earlier this year following the rescue of over 3,000 dogs and the conviction and jailing of research staff, including the Director of B&K, for animal abuse and illegally killing dogs.

Beagles are the ‘dog of choice’ in research because of their docile nature and gentle character. Experiments include being force fed or forced to inhale chemicals in toxicity tests which may last days, months or even longer for drugs, pesticides or household products, or undergoing surgery to deliberately suffer heart attacks in cardiac research.

Not only do experiments on dogs (and other animals) cause immense suffering, they relate poorly to disease diagnosis and prediction of safety in humans. Despite claims by the UK Government that alternatives to animal testing are now a scientific imperative and that animals are used ‘only when necessary’, millions continue to suffer in experiments every year across the UK and worldwide. Allowing expansion of facilities ensures profit from animal breeding, supply and use can only increase.

The Lush Prize supports and funds only animal-free research and wants to see an end to the use of dogs and all other animals in cruel and outdated experiments, by replacement with human relevant as well as humane, modern methods. Find out more about the Prize and our award winning scientists, campaigners and educators.

For more information on the beagle facility see the Animal Justice Project website.