You are in: Home » Blog » Korean Ministry of Environment’s new vision for humane science 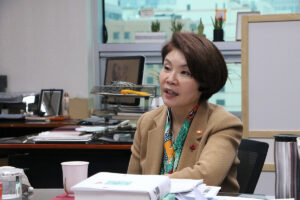 Jeoung-ae Han of the Ministry of Environment and National Assembly in South Korea received a Commendation in the 2018 Lush Prize for her work on the passage of a major chemical law (K-REACH) reform requiring prioritisation of replacement alternatives to animal testing.

Humane Society International Korea (HSI/Korea) has been working with legislators including Han to improve chemical laws and policies to incorporate alternative approaches to animal testing.

Since Han was appointed as Minister of Environment in January 2021, she launched a task force to draft plans for promoting alternatives to animal testing. After a series of task force meetings, the Ministry of Environment (hereafter ME) introduced the 2030 chemical safety and animal welfare vision. The vision aims to produce over 60% of chemical data using alternative methods by 2030.

Borami Seo: As a politician, you have always been supportive of animal welfare issues. Since being appointed as a minister, can you tell us briefly what you have been focusing on around animal welfare?

Jeoung-ae Han: Many animal welfare issues fall under the ME’s responsibilities. When I began to look into the on-going animal issues, there was a lot of work to be done. A few issues that I focused on included:

2. Provision to end captive bear breeding: ME is discussing stopping breeding bears in captivity with bear farm owners. To provide better protection for existing captive bears, ME is having a dialogue to establish a sanctuary.

3. Closing the legal loopholes to improve protection for wild animals used for the exhibition: there is an effort to improve zoo facilities for animals. Some plans are under discussion to prohibit human activities such as petting or riding that cause stress to animals and to stop the display of wild animals at commercial shops like cafes.

4. End feeding of dogs with human food waste: it is currently allowed to feed human food waste to dogs. This practice is no longer appropriate while there are discussions around ending dogs for consumption. We are working on providing gas facilities to process the human food waste instead of feeding it to caged dogs.

Other than these, other projects are also underway, including improving welfare for abandoned wildlife, endangered animals and more.

Borami Seo: Regarding the new vision for chemical safety, how did the task force come about?

Jeoung-ae Han: Soon after I assumed the role as a minister, I selected ME’s five priority topics to work on. We launched task forces for these five areas, and chemical safety was one of them. ME carried out a series of task force meetings throughout 2021. As a result, the 2030 Chemical Safety and Animal Welfare vision was introduced in October. It aims to use alternatives to animal testing methods to produce 60% of chemical information by improving infrastructure and technology.

Borami Seo: When you were a member of the National Assembly, the National Assembly passed the amendments to the Act on Registration, Evaluation, Etc. of Chemicals (K-REACH in short) and the Act on the Consumer Chemical Products and Biocides Safety Control (K-BPR in short). These amendments are to promote animal testing replacement. What was the reaction from the other lawmakers when reviewing the bills?

Jeoung-ae Han: When there are strong opposing opinions from other political parties or stakeholders on the proposed bills or policy, it is difficult to move the proposal forward. However, with the proposed bills to amend K-REACH and K-BPR, there was a consensus amongst lawmakers around recognising problems regarding animal testing. Even though the initial discussion with the Ministry of Environment was not easy, the ME was cooperative in passing the amendments and considered it a timely amendment.

Borami Seo: At the first task force meeting, I remember you welcoming participants and saying that ‘animal testing replacement is a difficult subject’. Why do you think it is difficult?

Jeoung-ae Han: When certain methods or theories have been regarded as standard for a very long time, it is difficult to get new methods or theories accepted. When it comes to human physiology and biology, we have to take it with more careful approaches. I think, replacing the current practice in animal testing is one of these examples.

In addition, we need to build strong infrastructure, establish technical skills, provide expert training, and more widely use alternative approaches. Although South Korea is in the beginning step, I expect that our proactive efforts in advancing research and technology will help change this.

However, it cannot be done by one Ministry alone. We need collaborative efforts and a shared understanding of why we need alternative approaches to animal testing. Public awareness is also important. Consumer demand to use cruelty-free products can help change corporations. I think with ME’s initiatives to develop alternative methods as public sector and encouragement for private sectors to use these approaches, the situation will improve.

Borami Seo: What was your expectation when the task force was first launched?

Jeoung-ae Han: I believe that the future is moving towards animal testing replacement by applying new technological approaches in toxicity assessment and other research fields. Now that there is a legal basis with K-REACH and K-BPR amendments, the next priority step is preparing for the mid-long term roadmap to promote alternative approaches. Since launching in March 2021, stakeholders and experts have participated in four task force forums with key topics around technology, policy and dissemination. I understand that HSI/Korea welcomed the ME’s new vision as well. Although it was a short timeframe to prepare for the roadmap, I’m happy that we were able to produce a comprehensive plan. I will continue to pay attention to ensure its implementation.

– Education: Training for QSAR and other approaches

3. Development of alternative approaches and advancement of hazard assessment

Borami Seo: Do you have any expectations on how this new vision can be a leading example for other authorities?

Jeoung-ae Han: Alternative methods are applied in numerous fields including chemicals, cosmetics, medical devices, and pharmaceuticals, and pesticides. In Korea, although animal testing was banned in 2017 for cosmetics, the chemical field is only in the beginning stages of replacement of animal testing. In this regard, I think ME is in a fast-follower position to adopt humane science.

We have ample opportunities to use alternative methods, compared to other ministries. It’s because of the need to produce an enormous hazard and risk information in the approval process of chemical and biocidal product registration. In addition, there are internationally validated methods and computer-based analysis or prediction methods. I expect that if alternative methods are widely adopted in the chemical field, its positive effect will be pretty enormous across our society.

I believe that with ME’s 2030 vision and roadmap that includes strengthening public GLP and technology development, we can play an important role in disseminating alternative methods replacing animal testing.

Borami Seo: Thank you for introducing ME’s vision to advance chemical safety management. Many experts have been tirelessly working on research areas including predictive toxicology and human cell-based methods. With this important initiative by ME, I hope to see other central ministries, public sectors and private companies come together to advance the development and dissemination of alternative approaches to animal testing.