You are in: Home » Blog » Lush Prize at FRAME 18th Annual Lecture 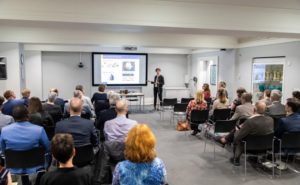 FRAME, the Fund for the Replacement of Animal Experiments, held it’s 18th Annual Lecture at the Wellcome Trust in London on 17th October.

The lecture was entitled ‘Human In-Silico Trials for Drug Safety and Efficacy Evaluation‘ and presented by Professor Blanca Rodriguez, a member of the Computational BioMedicine Team at Oxford University and member of the NC3Rs board, as well as adviser to the US Food and Drug Administration on in-silico methods. The lecture was also timed to commemorate the 50th anniversary of FRAME, established in 1969.

Professor Rodriguez explained how in-silico methods of cardiotoxicity (heart damage) prediction can drive replacement of animals in research and therapy testing, by the use of both ‘diseased’ and ‘non-diseased’ models. These models allow for better anatomical and functional variability, as well as specific differences in individuals and populations (heterogeneity) which animal tests cannot address.

The models are relevant to research in academia, industry, clinical and regulators and provide human relevant focus with what is known as high spatio-temporal resolution – a high level of targeted predictability to explain disease. The work is also being extended from heart models to those of other organs and beyond, into cancer research for example.

On being asked if the models had been compared to a real life situation, Professor Rodriguez explained how the technology had been through this several times and would be going through qualification via the industry. 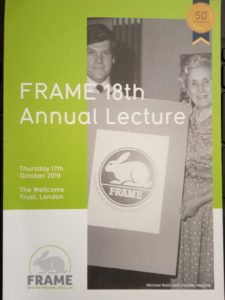 The lecture was well attended by a mixed audience of invitees, including industry, academia, government and regulatory agencies. After the lecture, there was a Q&A/audience discussion, including a need to overcome the disconnect between regulatory and academic stakeholders. Professor Rodriguez explained that releasing the model software from academia to industry was done to raise awareness and engage with regulators, to change the way all stakeholders think about such models and show how its advanced capabilities could result in a library of different models for better disease research and drug development.

You can watch the full lecture on the FRAME YouTube page.