You are in: Home » Blog » Doctors Against Animal Experiments talk about COVID-19

Merle Büter attended a webinar in April for Lush Prize, and has translated the main points for English readers.

Doctors Against Animal Experiments (Ärzte gegen Tierversuche) is a German campaigning organisation that has been shortlisted for a Lush Prize several times. Dr Tamara Zietek of DAAE held a webinar recently on the topic of ‘Corona shows why we need research without animal testing’. The webinar is available on Youtube in German.

Directed at a non-scientific audience, Zietek provided two reasons why animal experiments should be replaced: Firstly, she argued that animal experiments had poor predictivity for human medicine, and secondly, that there are already better methods such as the multi-organ-chip and lung organoids available. However, they require more research and funding.

In her webinar, Zietek cited several newspaper articles around breakthroughs in animal experiments in the urgent race to find a vaccination for COVID-19. It is important to understand that animals are tested for safety of the vaccine and the dosage but not effectiveness (efficacy). The latter is impossible as animal experiments have such poor predictivity and efficacy is better measured in larger scale human trials.

The question that we need to ask is “Are animal experiments a good model to find out whether substances are secure for humans?”. Zietek answers this with a firm “no” and explains that rats, for example, tolerate 300 times more asbestos than humans. This is just one example of how rats are not a good model for humans and yet they have been one of the most widely used species in animal experiments for decades. Another pressing issue is the concern about how many potentially useful therapies have not progressed to human trials because they are inefficient in animal experiments. There are several examples of medication and substances that have proven helpful for humans but are toxic or deadly for animals, although are available for use as they were marketed before modern drug testing regulatory requirements in animals (known as ‘preclinical’ tests) (see table 1). This means that there are unexplored therapies for humans, because they were tested but eliminated based on animal tests.

Table 1: Substances and medication which are useful for humans but have had a toxic or deadly effect on animals. Source: Webinar

Animal safety tests have a failure rate of 80-90%

A study from the Friedrich-Löffler-Institute announced that ferrets are a suitable infection model to test for a SARS-CoV-2 vaccination. The three reasons mentioned in the press release are that ferrets get infected with the coronavirus, they multiply the virus in their upper airways and they infect their conspecifics. However, unlike humans, ferrets do not show any kind of symptoms, which is critical. In the past, ferrets have generally been seen as a suitable model for all kinds of airway infections. Zietek referred to a study that analysed ‘success’ rates in drug development between 2006 and 2015. A drug has to run through up to four stages of testing. The process entails a preclinical phase (animal experiments with two different species, a rodent species (usually rat or mouse) and a non-rodent species (usually dog or monkey)), followed by one to three clinical phases with humans before a drug  may be launched. The result of the study showed that only 12.8% of drugs were launched following trial. This means that in 87.2% of drugs considered successful in animal tests, the drugs failed human trials and were therefore not allowed to be sold. The study author concludes that animal experiments are very poorly predictive and  generally unreliable for humans, demonstrated by a failure rate of 80-90% .

The crisis of reproduction

Another problem is the so-called crisis of reproduction. Dr Stefanie Schindler from the association Humans for Animal Rights underlines in her webinar how academic publications about animal trials are not reliable and not helpful in increasing the knowledge of the scientific community (The webinar is available on Youtube in German). In theory, researchers should be able to rely and build upon the findings of other scientists as a foundation for progress. In reality, studies have proven not to be as reliable as anticipated. Researcher Glenn C. Begley repeated in 2011 the tests of 53 published studies in academic journals (published here). In 47 of the 53 studies, the result was not the same as published. Published studies in journals aim to create universal standards and to contribute to research progress. Begley concludes that this is not the case in the current system.

The company Bayer also checked their published results and came to a similar conclusion: 65% of the studies are not consistent. Schindler explains that these findings are shocking but not surprising given the flaws of  animal research. There could be several reasons for the inconsistent results: Animals are not standardised – not even inbred mice – because of intra-species differences in animals in genetics, age, sex and other factors , even in laboratories. Environmental factors such as food, light, noise, size of the cages, temperature, and the option of being allowed to build nests, affect the conditions of the mice. This is not documented in the publications and test results. All of these factors might lead to different developments in different laboratories. Also, data selection and the handling of “lost” animals (dead, injured, replaced) is not standardised and often not documented. There is also a vast amount of unsuccessful animal research which is not published. The unreliability of animal experiments is mobilising the doctors for alternatives and animal-free test methods.

Only 1% of governmental funding is invested in animal-free testing

More human-relevant, animal-free research is important, especially in times of COVID-19 and the increase of trials. Fortunately, there are already numerous alternatives out there or in development. For example lung organoids, three-dimensional cell models that are based on human cells. Also, the multi-organ-chip (MOC) or organ-on-a-chip-method are well established for many tests, e.g. tumour research (liver, lung, heart, brain, skin, pancreas, uterus, muscles, and kidney). The MOC system has a very high prediction rate for humans, uses a combination of in-vitro and in-silico (computer based) techniques and the effects of test substances can be seen directly on different organs.

A common critique against earlier organ-on-a-chip-methods was a lack of  immune system, blood vessels and nerve cells – but the system is advancing on an ongoing basis and published research shows how these characteristics are being integrated to develop state of the art MOC test models.

However, funding continues to be a major issue to develop these methods further.  Zietek explains that there is not sufficient funding for research in Germany. Only 1% of governmental funding is invested in alternatives to animal experiments. This is stopping progress and development in this sector. Another block is that the World Health Organisation (WHO) presented in March 2020 “A coordinated global research roadmap: 2019 novel coronavirus” which aims to invest in and continue focus on animal experiments rather than alternative approaches. The lack of financial support in animal-free tests is criticised by Doctors Against Animal Experiments in Germany. The current agenda will not only continue to cause a lot of pain and suffering to animals, but the results will ultimately not lead to success. 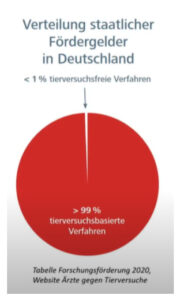 Diagram: Governmental funding of animal-free tests is below 1% in Germany. Source: Webinar

In alliance with Humans for Animal Rights, Doctors Against Animal Experiments started the campaign “Withdrawal from animal experiments. NOW!” („Ausstieg aus dem Tierversuch. JETZT!“. Available in German). “Cruel and outdated”, is how the activists and doctors describe animal experiments and argue that they should not be part of science and research in the 21st Century. The campaign, which aims for a shift in German legislation, is supported by twelve German animal welfare and animal rights associations. Initially, the campaign was launched in January 2020 but the topic gained more urgency due to COVID-19. With the webinar series, the alliance gathered experts in certain aspects to show that animal experiments are not the answer. It is time for the German government to implement a strategic change in scientific research. The petition, which demands a shift of funding and an “exit plan” to eliminate animal experiments uses the  Netherlands’ Government plan as a model and has so far been signed by 13,900 people.

The Netherlands as a role model

In 2016, members of the Dutch government presented a comprehensive plan to phase out animal-based safety testing, requesting that by 2025, the use of animals in tests for vaccines, chemicals, food ingredients, pesticides, and veterinary medicines should end. A motion was also passed in parliament and discussions continue on the 2025 plan. According to PETA, the Netherlands are on their goal “to lead the world in innovative animal-free science.”