You are in: Home » World Congress 9

Welcome to the Lush Prize page for WC9. We have an exhibition stand (Booth #29) and we are also presenting our poster ‘1R is the new 3Rs’ on Wednesday 27th August as part of Theme VII on the ethics of using animals in research.

Please drop along to see us and discuss how we can support your initiatives to end animal testing. 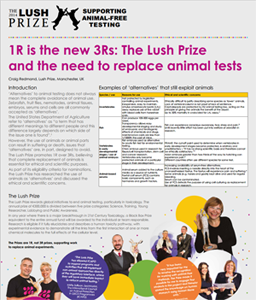 The poster discusses ‘alternatives’ to animal testing that still exploit animals, such as: use of invertebrates; fish; vertebrates in early developmental stages / use of animal embryos; animal-based serums.

The use of sentient animals, such as fish, and cruel processes, such as foetal calf serum, should not be accepted by those working in alternatives to animal testing. We are calling for a stronger embracing of the concept of 1R not 3Rs.

Download a copy of the poster (PDF). The research conducted for the poster is expected to be published later this year.

The Lush Prize – Rewarding innovative animal-free science around the world

Each year, the Lush Prize awards £250,000 (350,000€) to initiatives working to end the use of animals in toxicology testing for consumer products and ingredients.

There are five categories of award:

Alternatively, The Lush Black Box Prize offers, in any one year, the full £250,000 for a key breakthrough in human toxicity pathways research.

What’s different about the Lush Prize?

1R not 3Rs:
Many regulations and prizes are directed towards the broader idea of the 3Rs: reduction, refinement, and replacement of the use of animals. The Lush Prize, as a project driven by animal ethics, seeks only to support projects working on the complete replacement of animal tests.

Largest prize fund:
At £250,000 every year, the Lush Prize is the largest annual financial reward in its field.

How to get involved

Nominations open for the Lush Prize open in April each year. You can nominate your own work or that of another organisation or individual. Judging is carried out by a panel of experts from around the world – scientists, politicians and campaigners.

Winners participate in a conference, can have their work published in a special edition of the peer-reviewed journal ATLA (see 2013 edition) and attend a fantastic awards ceremony in London.

See full details of the prize categories and how to nominate.

Nominations have now closed for the 2014 Awards so sign up for our e-newsletter to be kept informed of the opening of the 2015 Prize.

On Friday 14th November 2014 we are holding a daytime conference in London on the theme ‘Is 1R the new 3Rs?’

The conference will discuss 21st Century Toxicology and whether the 3Rs framework is an idea that has had its day or whether a significant pathway-based understanding remains so distant that 3Rs will retain its relevance for many years to come.

To register your interest in the conference email craig@lushprize.org

The conference will be followed by the Awards Ceremony of the Lush Prize 2014.

“The Lush Prize has allowed ICAPO to support programs and activities that will implement non-animal approaches directly at the regulatory interface, where they will have immediate impact to reduce animal testing.”

“Winning the Lush Prize has made an enormous difference to our organisation. It has brought both recognition for all our work to provide training in non-animal test methods, and additional funding to expand this work further. We are now able to continue reaching out to students and young researchers, helping to ensure that the next generation of scientists uses scientifically advanced and ethically sound research tools, rather than outdated and unnecessary animal tests.”

“It has been very important for me to receive the recognition for working with animal-free methods. The Prize made it possible for me to engage four students in the project and thereby spread the knowledge on human research using human tissue only.”

Line won £12,500 for her research studying the impact of toxics on placental tissue.

“The money we received from the Lush Prize gave a significant boost, enabling us to develop new and exciting ways to create consumer awareness about cosmetics testing.”

SAFE won £25,000 for publicising the use of animal-testing in national drugs regulation and helping consumers to buy cruelty-free products.